Vanua Balavu (Long Island) is a long and winding island with uplifted coral in the north, and volcanic landforms in the south. 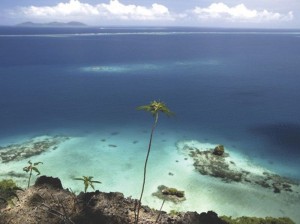 A huge lagoon bounded by a 130-kilometer barrier reef encloses a 37-by-16-kilometer lagoon extending east. One could cruise here for seven days or more without moving outside of the reefs. It is a well-watered island that has natural hot springs like Savusavu, yet these are large enough to soak in if you feel like visiting one of Mother Nature’s spas!

The island has about 1200 or so inhabitants, spread between 17 villages nestled along the coastline. A small clinic/hospital serves the local population, and of course there is a school. This island will give you a taste of the old South Pacific.

History tells us that the Tongan warlord Ma’afu (who invaded Fiji from Tonga by working his way up through the Lau group of islands) made the chiefly village of Lomaloma the base from which he would attempt to conquer the rest of Fiji – there is a small monument near the wharf in recognition of this. 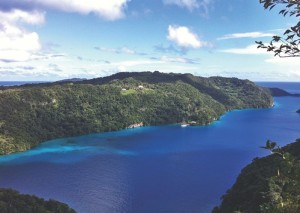 The kinship between Fijians and Tongans here remains strong, with some 400 Tongans living in the southern portion of the Sawana village.

In 1840, Commodore Wilkes of the U.S. Exploring Expedition, named Vanua Balavu and its adjacent islands within the barrier reef, as the ‘exploring isles’. In these old sailing days, Lomaloma was an important Port for ships coming from Tonga.

After 1874 when Fiji became a British colony, the economic importance of Vanua Balavu dwindled, and the island hasn’t changed much since. There are no restaurants, bars, nightclubs, banks or travel agencies, and shopping is limited to a couple of village stores – so you should only bring Fijian currency to deal in. Owing to this lack of development, the island is truly unspoiled. 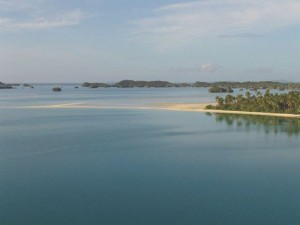 The island has a beautiful harbour for yachts at the north end called the Bay of Islands (or Qilaqila in Fijian), for which it is famed. This Bay is a recognized hurricane shelter. Here you will find The Qilaqila Marine Reserve. With so few human residents and visitors, coupled with a lack of development, the reefs of Vanua Balavu are relatively pristine.

There is plenty to do here, a guide can show you the sacred burial caves between Narocivo and Namalata villages, and the cave where the god of shells resides. You can work your way around to the west side of the island to find isolated tropical beaches with great snorkeling.

If you are visiting around Christmas time, you may be able to witness a very special ritual that has been performed for generations. Villagers of Mavana village enter the Masomo lake dressed only in leaf skirts to stir up the muddy lake bed which, coupled with a bit of ancient magic, stuns the mullet fish (yawa) ready for the nearby awaiting spear fishermen. This practice ensures enough food for the village Christmas feast. 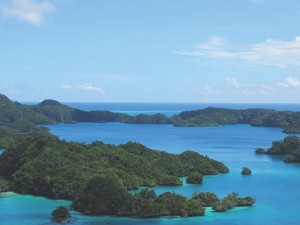 Nestled in a sleepy harbour often referred to as the ‘Turquoise Harbour’ due to its brilliant emerald hue, you will find the Bavatu Plantation. The Plantation almost completely surrounds the harbour and offers lovely walks and spectacular scenic views including westward over the Bay of Islands.

The “Royal Exploring Isles Yacht Squadron” is located on the waters edge on the point of a snug little cove about halfway down the western side of ‘Turquoise Harbour’ and was officially opened in 2003 by the late King of Tonga.

It is generally only fully accessible when the estate owners are in residence, and even then, it is very relaxed. You are welcome to use the facilities, but please – look after yourself. The lovely folks that own the estate aren’t always there to be your hosts.

Located at 17.11S and 179W, the harbour is very secure and can accommodate a few dozen yachts. There are several plantation moorings, but they are generally “lay back or berth” moorings, positioned to secure the plantation owners yachts.

There is also quite a good hurricane anchorage at Maluca on the eastern side of the island.

Only a severe Northerly blow can affect a small part of the harbour. However, on the East side is an inner lagoon, which can be entered at high tide by moderate draft vessels where absolute safety is guaranteed in any weather.

Only those who are properly introduced either through the owners or Vuda Point Marina (Vuda) and/or the Copra Shed Marina (Savusavu) may enjoy access to the Plantation and it’s scenic walks.

Remember, this is generally only when the estate owners are around, but when they are, the Royal Exploring Isles Yacht Squadron offers berths, showers, toilets, fresh water, BBQ, dinghy dock, lawn area, sun deck and a nifty bar with fridges that can be stocked by visitors on a ‘no host’ basis.

Your yacht, or your dinghy!