You are here: Home / Conservation / A low carbon shipping future?

By Alison Newell, Pacific Centre for the Environment and Sustainable Development, USP

Oceania, 10 million people and 25,000 islands scattered across 3 million square miles of the Pacific, the world’s largest ocean, is arguably the region most dependent on sea transport in the world.

Sea transport is the lifeline of the Pacific Islands, moving the vast majority of people, goods and resources. It is crucial for trade and sustainable development and impacts upon virtually every development initiative. Yet for many, existing maritime transport services are increasingly unaffordable and unsustainable. Ships are often old, poorly maintained and inefficient. Fossil fuel is often the largest single operating cost and this, combined with narrow reef passages and small loads, makes many routes economically unviable. Predicted increases in both fuel and compliance costs mean that this is going to get worse over time. Yet it wasn’t that long ago that Pacific Islanders viewed their ocean as their highway, maintaining an extensive trading and kinship network across the Pacific using 100% renewable energy powered vessels. 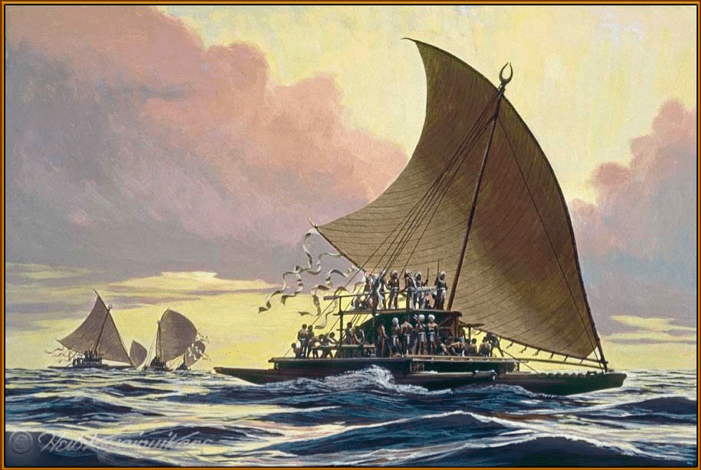 The unique characteristics of Pacific island shipping (long routes, minute economies, imbalance in inward and outward loadings, financing barriers, high risks and high infrastructural costs) present a greater challenge than for most other parts of the world. There has been a long history of the region struggling to find long-term, sustainable, and cost- viable solutions for sea transport, even in periods of relatively low energy costs. This is especially true for domestic transport.

The region is also extremely dependent on imported fossil fuel, which represents a major drain on economies (Pacific Island Countries and Territories’ fuel bill in 2013 was US$6.39 billion), a major barrier to development and a source of vulnerability. Some 75% of fossil fuel used in the Pacific is for transport and for most sea transport is a significant, and sometimes the majority, user (for countries such as Tokelau sea transport uses up to 90% of imported fuels).

Village surveys we have been doing over the past few years in Kadavu and Southern Lomaiviti show that fuel for outboard motors is the single largest fuel user in those villages and increasing over time. Yet the vast majority of effort towards reducing fossil fuel dependency in the region is going towards using renewable energy for electricity – which is a good thing, but perhaps targeting the ‘low hanging fruit’ means we’re missing the main issue.

International shipping is undergoing a revolution, searching for increased efficiency of fuel use driven primarily by fluctuating but escalating fuel costs, international agreements to reduce greenhouse gas emissions, and increasing awareness of the environmental and public health risks associated with shipping. 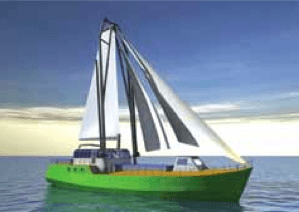 Recently universities, research organisations and industry groups have been concentrating on developing low carbon shipping solutions, including renewable energy technology, particularly wind and solar. There have been rapid advances in ship designs (e.g. hull, waste heat recovery and propeller related technology), alternative fuels such as LNG and methane and renewable energy, including wind (kite sails, soft sails, fixed wing sails and rotors), photovoltaics and biofuels. The Greenheart Project vessel shown here is an example of a design for a 220 tonne sail-solar powered freighter capable of beach landing and designed to carry 3 shipping containers.

What’s the potential for renewable energy shipping in the Pacific?

In 2013 the University of the South Pacific and the International Union for Conservation and Nature – Oceania Regional Office decided to join forces to research and raise awareness about the challenges faced by the region in terms of sustainable transport, and have set up the Oceania Centre for Sustainable Transport as a catalyst for those wanting to collaborate on finding sustainable solutions for the Pacific. Others have since joined including WWF South Pacific Programme. 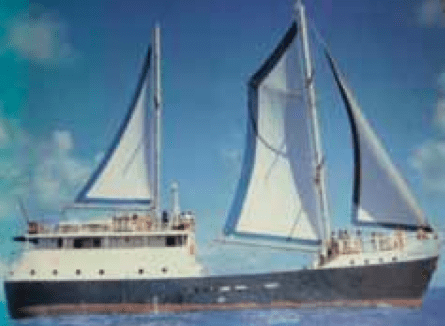 Luckily for us there was a range of innovative sustainable energy sea transport projects in the region during the last oil crisis, primarily targeting transport needs at village and island level, mainly for cargo and passenger transport and artisanal or small-scale commercial fishing. Designs and trials included retrofits of sails on passenger/cargo ferries, like Na Mataisau pictured here that operated in Fiji in the 1980’s – the rig was designed by Colin Philps senior and sails made by Colin Philps junior. There were designs of energy-efficient freighters for inter- island work in Tonga and Tuvalu, and sail-assisted village or island scale catamarans for transport and fishing across the region. These proved that significant savings (30% plus) were achievable at favourable rates of investment.

These past trials have left us a portfolio of analyses and designs that demonstrated that in times of high fuel cost, use of renewable energy technologies achieved significant results for modest investment. And since then there have been huge advances in low carbon technologies available for shipping.

So why aren’t there more sailing boats servicing domestic needs and what are we doing about it?

The reasons for this are complex. Policy and financing have been identified in both Pacific and international studies as the primary barriers to practical implementation of low carbon or renewable energy technologies for shipping. People’s perceptions also play a major part – sailing vessels, for example, are seen as being slow. The trials done so far prove that the use of sails as auxiliary actually increase speed and stability, reduce engine and propeller wear and fuel use, as well as providing increased passenger and crew comfort compared to a similar vessel using motor alone. Now that most commercial vessels are ‘slow steaming’ to reduce fuel consumption, they are travelling at speeds similar to those of boats under sail. The Kwai, operating from Hawaii, through Kiribati and down to the Cook Islands and back, is the only regularly operating cargo boat in the Pacific using sails (www.svkwai.com) and reports using less than half the fuel she would use if operating under motor alone.

Revitalising pride in the Pacific’s seafaring heritage as master voyagers, innovators and naval designers is a key way to encourage uptake of low carbon shipping and to raise awareness of the options that are already out there for reducing fuel use for sea transport. USP hosted sustainable sea transport talanoa in 2012 and 2014 bringing together experts in low carbon shipping from around the world, traditional sailors and boat builders, communities, government officials and NGOs, to share their stories and experiences and look for ways to increase the sustainability of shipping in the Pacific. Presentations from both talanoa are available here and here.

Click here for research, information and links for anyone interested in sustainable transport, land, air and sea. We encourage you to have a look and welcome your feedback, and help us support the Pacific transition to a low carbon transport future.