You are here: Home / Anchorages / Anchorage at Makogai – A Significant South Pacific Treasure

In the heart of the Lomaiviti Group, lies the island of Makogai; not only abundant with biodiversity and beauty, but brimming with South Pacific history. From Leprosy Hospital, 1911-1969 to Government Mariculture Centre 2014. 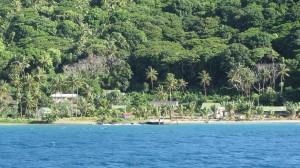 Throughout Fiji there are many myths and legends associated with so called ‘Leprosy stones’. These are believed to be the gravestones of Fijians who had died of the disease predating the arrival of Europeans and Asians.

Over many years, there was a gradual increasing awareness of the disease, and its contagious nature. Eventually under British rule the Leper Ordinance Act of 1899 was passed to prohibit sufferers from handling food, medicines and tobacco, using public transport, bathing in communal pools and lodging in public houses.

The Makogai Leprosy Hospital was officially opened on the 29th November 1911 when the first twenty patients arrived at the island onboard the Government ketch ‘Ramadi’. Soon patients were arriving from all over the Pacific; countries such as the Solomons, the then named Gilbert and Ellice Islands, Cook Islands, Samoa, and Tonga. Separate villages for ethnic groups were constructed to ‘promote peace and order’ and women were kept separate from the men. In total, over 4000 patients landed on the island. 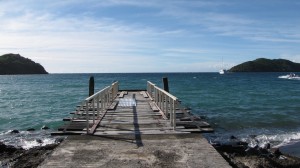 Initially, the only treatment offered was Chaulmoogra Oil, which was used to dress wounds and given as an intra-dermal injection. While never a cure, it appeared to reduce symptoms. The island was divided in two to prevent the spread of the disease between patients and workers. Even the shoes worn at the patient’s end of the Island were banned at the ‘clean end’ where the doctors and non-infected workers lived.

Finally, in 1948 – almost 40 years after the first patients were admitted, Dapsone, a sulpha drug and a cure against the bacterial cause of leprosy (or Hansen’s Disease, named after the Norwegian physician who identified the causal bacteria Mycobacterium leprae in 1873) was discovered.

During its 58 years as a leprosarium, approximately 2,500 patients were effectively treated and sent back home to their friends and families. Around 500 were repatriated back to their homeland and the remaining 1,241 died due to the direct effects and complications of leprosy. The deaths included a Fijian Sister, Maria Filomena, who had lived on the island for over 30 years as both a worker and patient having contracted the disease. You can visit her grave along with hundreds of others – in the large cemetery that overlooks Dalice Bay. 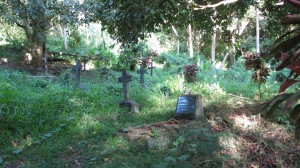 In 1969, the last patients with Leprosy left Makogai for Fiji’s purpose built Hospital in Suva. With their departure, the days of the Makogai Leprosy Hospital came to an end.

Today, the island has a very DHARMA Initiative (from the popular and sometimes confusing TV series, ‘LOST’) feel to it!

Some of the old structures remain as if the Leprosarium was still in operation, while others are mere shells hidden under vines and other foliage. Only the steps of the old hospital show where the central building once stood. The concrete foundations are still intact for 4 dorm blocks believed to have been the Chinese or Indian quarters – these are within walking distance from the hospital site. At the ‘clean’ end of the island, an approximately 20 minutes walk along the coastline, you can wander among the old staff quarters. Today, the houses are home to government Fisheries officers and their families. 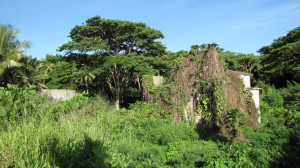 It is in this area that you can find what is left of the coconut soap factory, massive engine house, island store and even a bakery. The local school is located here and children play happily under the shade of the mango trees. Ask them to show you some of the old pottery and artefacts they have uncovered over the years. A walk back to where you began, this time taking a detour through the forest, will see you pass the old post office and wireless telephone centre. 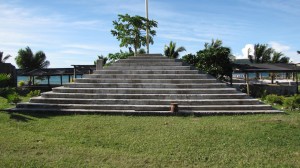 A snorkel just off the old arrival jetty in Dalice Bay uncovers even more historical artifacts; hospital beds lay strewn along the seabed under newly formed coral reefs. A closer look at these beds will also provide you with a clue as to what today’s inhabitants of the island are up to…

In 2011, Makogai officially became a Mariculture Centre. One of the main projects that the team of fisheries officers based here work on, is culturing giant clams (Tridacna). Once in abundance on Fiji’s reefs, many species have been overharvested and current levels are low. The adductor muscle is considered a delicacy and an aphrodisiac in China, which coupled with the harvesting of clams for food, shells and the aquarium trade – it is unsurprising that they have found themselves on the IUCN’s vulnerable list. In the 1980s an Australian-funded project began culturing them at Makogai – and thousands have since been transplanted to various parts of Fiji. 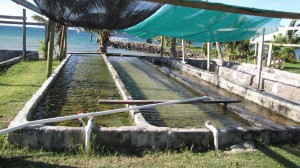 The old hospital beds lined up in the shallows of Dalice Bay are used to protect juvenile clams once they have been transplanted from the onshore breeding facility. Once deemed large enough to fend for themselves, they are available for repopulating other reef areas around Fiji.

The important role that the vasua (clams) play on the coral reef is often overlooked. A single giant clam can filter hundreds of litres of water in a day. As filter feeders, this keystone species offers a great line of defence against an outbreak of pesky crown of thorns starfish by filtering out thousands of their microscopic spawn. Remember: while we are busy trying to help replenish our reefs supplies, the Fisheries Act Cap 58 states that no person shall be in possession of, sell or export giant clam flesh, or shells. 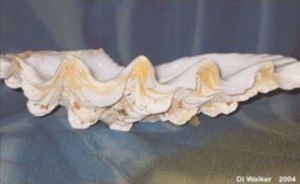 For more information or to arrange a tour of the old Leprosarium, you can call or email the Principal Fisheries Officer for the Eastern Division on (679) 336 1122 or [email protected] ahead of time who will make arrangements with staff on the island to prepare for your arrival. You will of course need to present your sevusevu to the people of the island before setting off on your exploration.