‘Trader’s’ general store and café at Musket Cove Marina fell victim to a freak lightning strike on Saturday evening (13th April). Unfortunately the building was completely destroyed by fire but luckily no one was injured, and no damage caused to surrounding buildings was reported. A yacht that was moored in the marina was also struck but thankfully suffered nothing more than electrical damage.

The Trader’s store is a popular stop for yachtsmen and women making use of the Marina facilities at Musket Cove, or just passing through to pick up a fantastic range of supplies, including a great selection of imported cheeses, frozen food, fresh vegetables and meat. 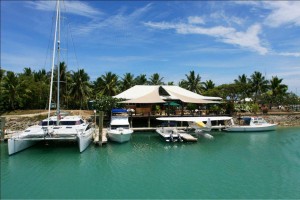 Members of Musket Cove staff, Leeward Island Services and Plantation Island Resort were quick to respond and contain the blaze. The Resort remains open and fully operation with the exception of the general store and the Island bar that is still under repair after sustaining damage in December from Cyclone Evan.

Stay tuned to FijiMarinas.com as more information will become available once Musket Cove management have had time to further assess the situation and make plans to rebuild the store. In the meantime, they will continue to operate as normal with no interruption to other activities and services.

While lightning storms are not uncommon in Fiji, and methods have been devised to mitigate damage and to even possibly avert a lightning strike. Lightning, however, doesn’t seem to pay attention to these ideas and as one yachtsman notes, ‘If lightning wants your boat, there is not much you can do about it’.

Despite best efforts and preparedness, at some point you may find yourself in a lightning storm.

Now we know you probably already know this stuff, right? But we figure a refresher hurts less that a lightning bolt! So…what should you do?

Most importantly, do not panic!

The National Oceanographic and Atmospheric Administration (NOAA) recommends following the 30-30 rule. If the time after seeing a lightning flash is less than 30 seconds from hearing the thunder, you are in danger of being hit and need to seek shelter immediately. 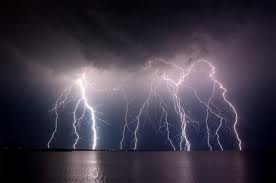 If you are moored in a slip, leave the boat and take shelter in/under a solid structure.

Get out of the water! Swimming during a lightning storm is extremely dangerous, especially near a boat.

Stow away any fishing rods that might attract the lightning.

Unplug any electrical appliances or devices.

Close all windows to prevent taking on water from high waves and rain.

A lightning strike can render a person unconscious and unable to prevent a fall overboard, therefore you should wear a personal flotation device (PFD) during a storm – especially while on deck.

The safest place to be during a lightning storm is below deck.

Avoid touching any metal objects, electrical components or the radio except in an emergency.

Sailboats are almost always struck at the top of the mast and people under it are generally safe.

Lightning can completely wipe out a boat’s electrical system and destroy the engine. It’s even been known to blast holes in the hull! 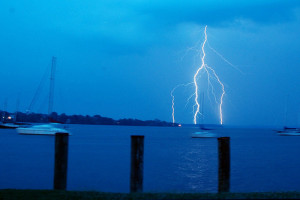 There is no way to completely lightning-proof a boat. A vessel is a potential target for lightning any time it’s on the water. You need to provide an unobstructed way for the lightning to dissipate its energy to ground (i.e. the water surrounding you). You can make your boat safer during a storm with a good bonding system that uses arrestors to protect electronic equipment while providing a safe path for the lightning strike.

For sailboats, the protective system should have heavy cables attached to the tallest parts of the boat, like masts, outriggers, and antennas. The wires should run to the grounding strips that are in the water.

Such a system can provide a ‘cone of protection’ around the boat roughly equal to its height which means people on board should be safe for the duration of the lightning storm should the vessel be struck.

After seeing the last flash of lightning, it is important to wait a further 30 minutes before leaving your safe shelter or venturing back on deck. This is because a number of lightning related deaths have reportedly occurred after the storm has passed; as always, it is better to be safe than sorry!

Remember, even if you cannot see it, if you can hear thunder then lightning is in the area.