The Point Passage light lies on the INSIDE of the reef, about 50 meters east of the actual end of the reef. Chart legends show it as being a lighthouse, in truth it is more on the lines of a light standard sticking up on the reef. It is mostly, but not always, lit. 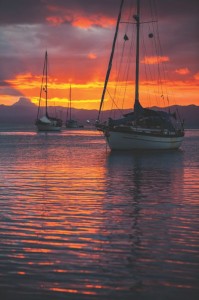 The rocks on the west side of Point Passage only break with a West to Southwest swell. In other words, although the reef passage is almost a nautical mile wide, there is such a thing as too much caution in leaving a wide berth to the light.

As you approach Savusavu from the Point Passage light, you cannot see Savusavu, but you will see the Copra Mill in Balaga Bay, which lies to the North-East of Savusavu. Although it’s a nice, quiet anchorage to visit (so long as the wind is not from the west), it IS NOT Savusavu!

There is a mooring for the bows of the inter-island ferrys west of the Main Dock. If there is a ferry at the dock, it is probable that there is a line between the mooring buoy and the ferry. Based only on observation, no cruising yacht has been successful in moving the ferry by pushing on the mooring line.

There is a channel marker as you enter Nakama Creek that you should leave to your port side. An avoidance waypoint, as determined by S/V  Jill Diane  is 16˚ 46.659’S 179˚ 19.796’E. This reference is provided for your convienence and is to be used at your own risk.