You are here: Home / Features / The History of Game Fishing in Fiji

There has always been a lot of interest in Game Fishing in Fiji Waters. Over the years early pioneers who had recognized the fishing potential of fish local waters told many a tale of their adventures with elusive Marlin and Sailfish. Billfish species are present in Fiji Waters along with a plethora of other giant sized pelagic species and the famous Fiji wahoo ‘that wouldn’t fit in a bath tub’. 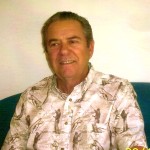 I had heard of the legendary Captain Sanders, but it wasn’t until a mutual friend, Captain John Harrison introduced us, that I finally met him. Captain Sanders was the Harbour Master at Levuka. He decided to give fishing for bigger Game fish a try and imported a sturdy reel for the job – this was long before tackle shops became commonplace throughout Fiji.

I went to see “Sandy” not long after his 93rd Birthday and he was willing to give me his trusted reel – so long as I looked after it, which I promised to do. The Rod was unidentifiable – probably a Tanika Rod from New Zealand; I should have asked for that too, but it seemed he was keen to keep it on the wall. I vowed to keep the reel ‘in the know in fishing circles’ and promised myself that it would become a “trophy prize” if I were able to get the International Game Fishing Series going in Fiji”.

In 1972, the Game Fish Club of Fiji staged an International Billfish Tournament at the then Korolevu Beach Hotel – the only Billfish that was caught in that tournament was a Striped Marlin, which weighed around 93lbs. I was presented with a replica at the Royal Suva Yacht Club by Herb Marlow of Air New Zealand, which was a major sponsor of that first Billfish tournament.

I was very fortunate to be able to attend the Hawaiian International Billfish Tournament in Kona on the Big Island of Hawaii in 1977. However, like many of the teams that went before us, we were not overly successful. By the time I went back again the following year we had encountered enough Billfish of every description in Fiji Waters, but had not landed all that many. It was back at the HIBT, that I met Elwood K Harry the President of The International Game Fish Association who invited me to become an IGFA Representative for Fiji. 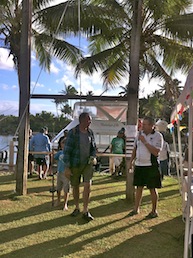 I kept up the effort to have our own International Game Fishing Tournament and in 1981, after many smaller Tournaments out of the Royal Suva Yacht Club and a celebratory ‘Centenary’ National competition at Levuka, I was finally given the go- ahead to organize the Fiji’s First International Game Fishing Tournament. The tournament was to be held from what is now the Pearl South Pacific Resort in Pacific Harbour – 30 adventure-filled Annual Tournaments later in 2013, we were still recording a tag and release Billfish and seeing giant sized Wahoo offloaded. 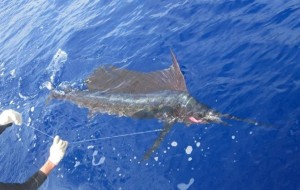 A sailfish being brought alongside for tagging Freedive Fiji

Some years as many as 6 tournaments were held from this same dependable location, sometimes welcoming up to 28 fishing vessels hosting teams from as far as Victoria and New South Wales in Australia, Papua New Guinea, Hawaii and even the Crown Prince of Tonga one year! Proud sponsors were always thrilled to see Billfish and a large array of great Game Fish come to the scales at each event. The original sponsor, Peter Chesterman of Carlton Brewery was behind the First Fiji International Game Fishing Tournament. Carlton Brewery continued to make tournaments possible and over the years there were many good- humoured ‘honours’ bestowed upon him – but none as appropriate as “The Father of International Game Fishing in Fiji”.

When I set to compiling the Fiji National Records and instituted the Fiji Tournament Records, they were based on all known catches up to 1985. Unsurprisingly, some anglers were skeptical of the weight of the fish recorded by the Game Fish Club of Fiji as there didn’t seem to be anything of that size around anymore. 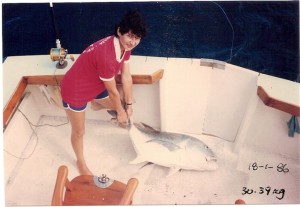 Pauline’s fish was a World Record and defeated the previous size Record by over 30 lbs (about 14kg).

Fiji was always known for its giant Wahoo and men have set World Records for some monsters at various times. However it’s the Ladies who have been the most successful in setting World Records. Jan Bates and Sharon Light hold current records for Wahoo and Barracuda and Pauline Threadingham added 30lbs to the previous World Record for a Trevally, giant at that time. The 67lbs of fish put up a good long fight but eventually lost to the 30lb tackle. Angler Melvin Threadingham very nearly set a new World Record with the biggest Rod and Reel capture in Fiji waters. His Blue Marlin weighed in at 447kg on 37kg tackle -that’s more than 10 times the strength of the fishing line! 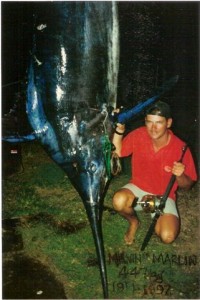 Weather conditions play a critical role in how successful Game Fishing can be. If sea conditions aren’t ideal, there is always the option to fish the calmer areas by drop line; that is to rig baits and set them to depths in the hope of hooking some nice eating fish.

Since no two days of fishing are the same, and of course fish don’t feed all of the time, you can try to work the areas where there are most likely to be fish feeding at a certain time of the tide, when it is either rising or falling. 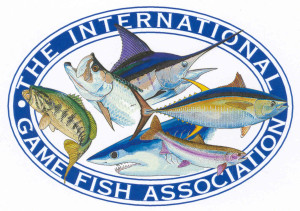 Through NMFS in USA we have set up a Tag & Release system for Billfish and kept a Register. Here in Fiji, you can collect a Tag card and corresponding numbered Tag from the Fiji International Game Fish Association, which distributes them for Tournaments as well as recreational Fishing. When you hook a Billfish, and intend to release it, the Tag should be inserted into a location of heavy muscle, just below the dorsal fin. Considerable care and attention should be exercised when bringing a Marlin or Sailfish up beside the boat before releasing it. It should be kept in the water and held by the ‘bill’ facing away from you, keep the water flowing through the mouth and over the gills by motoring the boat slowly forward. The fish will let you know when she is revived and ready to be released by trying to swim, at this time, gently push her away from the boat and watch her swim off into the blue.

When an Angler recaptures a tagged fish, the tag number should be reported along with the date and location of the recapture and the measurement of the fish. The objective is to provide Marine Biologists with information that can help determine growth rate and migration patterns.

Should you be interested in participating in the Tag and Release Program or officially weighing your fish while cruising Fiji waters, then please get in touch with Harvie Probert on: 999 8500, President of the Fiji International Game Fishing Association for more information – or one of the other IGFA Representatives in Fiji, Pat Nelson, John Llanes and Marc McElrath.

The International Game Fish Association maintains and publishes the World Records for recognized Games Fishes and maintains these records for nearly 400 species around the world. Becoming a Member of IGFA is easy; and you can learn more about the various programs, competitions and rules and to receive World Record Publications.