You are here: Home / Anchorages / West Across Fiji

A large portion of yachts cruising Fiji each year begin their cruises in Savusavu, and end them in Nadi Waters (the large bay off Nadi which includes both Denarau and Vuda Point Marinas). Broadly speaking, there are three routes between these two places.

The first two are the most commonly taken, while few take the third. I have sailed all three. Below I describe features of all, and would argue that more people should try the third, the “one less traveled”.  I am an old- school sailor who navigates his own paths. These notes do not consider using shared GPS waypoints or tracks. In Fiji one should not expect to obtain stores, fuel or water, outside of the major ports or towns. 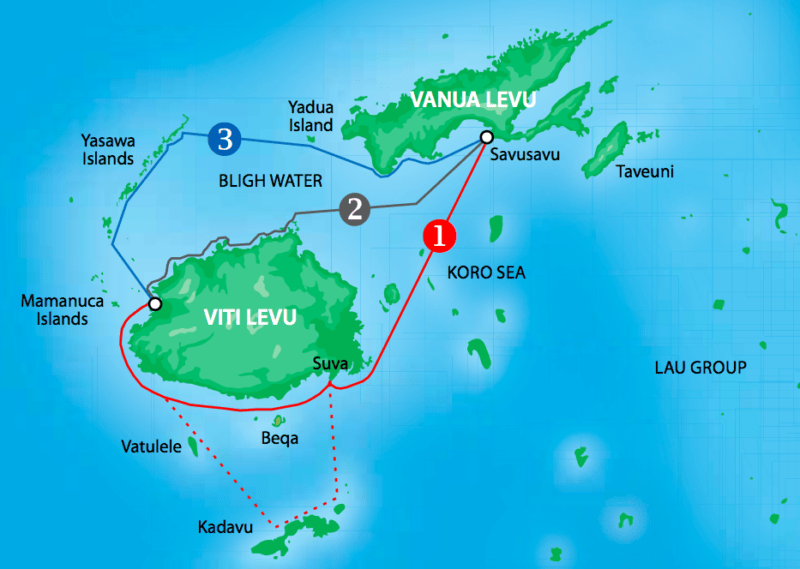 On Savusavu’s doorstep lies what are arguably Fiji’s best cruising areas: both the Lau Group, and the Koro Sea beckon. Before moving west, a couple of weeks here is almost obligatory, while a couple of months may become the highlight of the visit to Fiji. Some sailors return to Savusavu after cruising the Lau, while others will exit the Lau towards the west, sailing onwards south of Viti Levu. Alternatively, sailing through some of the Koro Sea is inevitable after leaving Savusavu towards the south coast of Viti Levu, and several stops can be planned.

Sailing around the south coast of Viti Levu makes for easy navigation, with deep seas and generally with reliable, fair winds. Close to your route is Suva, Fiji’s capital, and a most interesting city. The Royal Suva Yacht Club makes a great base for a few days here. Kadavu, 60 miles to the south of Suva is another great cruising ground well worth at least two weeks’ visit.

Crossing Fiji by this route takes a minimum of 3 – 4 days.

The east and north coasts of Viti Levu are guarded by an almost continuous array of barrier and offshore reefs. Several clear passages through these reefs allow access to a well-used route around the coast. Mostly only 1 – 2 miles offshore and less than a mile wide, this route was once (in British times) well-marked with scores of beacons. My BA charts show >50 beacons here, though many of these are now lost to time, or cyclones (a recent estimate suggested 50% are lost). They cannot be relied on. With frequent reefs, and many course changes, this route requires careful and continuous piloting. Due to runoff from the land the shallow water is often unclear, so spotting reefs in less- than-ideal light can be challenging. However, safe anchorage can be found almost anywhere along the route, so when it becomes unsafe to continue, just stop for the night. The coast is fringed with mangroves and is not remarkable for scenery.

Many sailors heading west enter the route through Nananu Passage, which leads to Nananu-i-Ra Island, off the major town of Rakiraki on the NE corner of Viti Levu. The island, promoted for kite-surfing, offers excellent anchorages, as well as a very hospitable resort ashore. With about 50 miles coasting to Lautoka, and given the care required, most will need 2 days to sail on to the more open Nadi Waters.

Crossing Fiji by this route takes a minimum of 3 – 4 days. For longer trips, stores will be available from the coastal towns, though – apart from Lautoka – these are not convenient to access from a boat.

Sailing from Savusavu along the south coast of Vanua Levu is easy and interesting. Winds tend to be fair, and skies clear. Few supplies (including fuel and water) will be available until arrival in Nadi Waters, which could be a month away at cruising speeds.

There are several excellent anchorages on the coast of Vanua Levu, west of Savusavu. The best of these is superb Nasonisoni Harbour, both an ideal cruising stop and a hurricane hole if one is needed. Near the western end of Vanua Levu is an adequate anchorage off the ferry port, Nabouwalu. Some basic stores might be available here, but I was unable to find a safe place to leave the dinghy. Five miles north of here is a conveyor-loading facility for large bulk carriers exporting wood chips to Asia. About five miles further north is excellent shelter in the mangrove-girt Bua Bay, a remote and empty world. Several villages hide behind the mangroves.

Twenty miles west of Bua Bay is the delightful island of Yadua. At the western end is an excellent anchorage, large enough for perhaps ten boats. This bay is named Strahan Harbour on BA charts, and Thukova (Cukova) Bay in Fijian. There is a clear passage through reefs across the entrance to the bay, though entry must be made in good light. Yadua is perhaps best known for the iguana reserve on the tiny, adjacent island of Yadua Taba (landing prohibited).

Another good anchorage is in Vakasa Bay on the north coast, just west of the Watering Bay shown on charts. An intensive Korean-funded operation based here has up to 40 divers, on 6 boats, scouring the sea of sea slugs. Watering Bay is a poor anchorage, and its water would not suit modern sailors.

To visit the Yadua’s only village, Denimanu, which is on the exposed eastern coast, it may be best to leave the yacht at anchor in Vakasa Bay. There is a 20-minute walk on the track over the ridge. First reached is a group of 18 new houses, built to replace houses wrecked in 2012 by Hurricane Evan. Walk on 300m to the old village where sevusevu can be given to Chief (Ratu) Johnny.

Sailing from Yadua through Bligh Water to Yasawa Island, at the north end of that chain, takes a little planning. There are reefs for about 5 miles when departing Yadua, and for about 10 miles on the approach to Yasawa Island, at the north of the Yasawa islands. Negotiating these requires either a GPS track that you can trust, or good light. There is about 40 miles of open water passage between these areas, so a very early departure is required.

It seems best to depart Yadua at dawn, using a GPS track recorded when arriving there. I did so, and arrived off the area of reefs approaching Yasawa Island at about 1300 hours, when the dangers there were clearly visible. The obvious anchorage to head for is at Sawa-i-Lau, and the great, dark limestone mountain of that name is clearly visible from 10 – 15 miles off.

Sailors here need to be aware that they may meet strong winds in the northern Yasawas; and that the reefs may be hard to spot if the light is poor. My Plan B was to head north through Round Island Passage, to heave-to in open water, and then return the next morning. Others may trust GPS tracks given to them. It pays to be prepared for difficulties here.

From Yasawa Island to Nadi Waters will take at least a few days – or a few weeks, depending on food supplies aboard, and your plans. It is a wonderful cruising area, and arriving in the north of the chain is a wonderful place to begin cruising the Yasawas.

When worrying about navigating this area it pays to remember Captain Bligh and his passage through here in 1789. He had been kicked off his ship “HMS Bounty” near Tofua, Tonga, with 18 of his men. They were cast adrift in a 23’ open boat with “150 lb bread, 16 pieces of pork each weighing 2 lb., 6 quarts of rum, 6 bottles of wine, with 28 gallons of water, and four empty barricoes.” This was enough food and water for perhaps a week. They also had some sail-repair materials, the carpenter’s tool chest, four cutlasses, a quadrant and a compass.

With this dreadfully overloaded open boat (freeboard was “a hand’s length”), and without charts or weapons, Bligh was able to safely make the 47-day voyage from Tonga to Kupang, Indonesia – 3618 nautical miles. Kupang was the nearest European settlement at the time, and the closest place he could expect to receive help in. The only casualty of this voyage was one man killed before the voyage began at Tofua, where Bligh had tried to find further food and water for his voyage.

Bligh and his men sailed through Fiji – Lau, Koro and what is now known as Bligh Water – well aware that they would most likely be eaten if they were caught by the locals. Ever the consummate navigator, Bligh kept notes and sketched maps of his discoveries along the way.

Many of the islands we see when sailing this area were first charted by this remarkable sailor. Continuing on through Australia’s Barrier Reef to a landfall on Cape York (Bligh had been here before with Captain Cook in 1770), Bligh and his then passed through Torres Strait and on to Kupang.

It is well worth downloading Bligh’s “DANGEROUS VOYAGE – 1789”, free from google to your iPad, before sailing this passage.