You are here: Home / Fiji Information / Exploring the Friendly North

Vanua Levu is second in size to Viti Levu yet it is unique in the absence of tourist infrastructure and the slow pace of life. The north shore of Vanua Levu is one of the most unexplored and undiscovered areas of Fiji. It presents lush, unspoiled tropical beauty with a spattering of traditional villages set on beaches surrounded by thriving forests and coconut plantations. The protected waters of the leeward north coast where the winds are lighter and seas flatter offers the opportunity for diving, fishing, snorkeling and surfing in season. 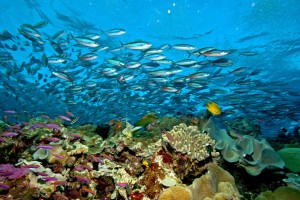 Just off the jetty at Palmlea Farms is Fiji’s Great Sea Reef. Known locally as Cakaulevu, it is the third longest continuous barrier reef system in the world. The reef is 99.9% unexplored. A reef so remote you can name your own dive site!

When a group of local marine experts examined the biological diversity of the GSR system in 2004, they found reef to have approximately 55% of the known coral reef fish in Fiji (with a predicted actual value of 80%), 74% of the known corals found in Fiji and a total of 40% of all the known marine flora and fauna in the Fiji Islands.

Leone Vokai is a PADI instructor born and raised living by the Great Sea Reef and as your master dive guide will provide you with detailed knowledge of the reef and the marine life you will see. Leone owns and operates Great Sea Reef Divers and can be contacted through Palmlea Farms Lodge.

A 30 minute journey by bus will deliver you to Labasa Town which is located on a delta formed by three rivers – the Wailevu the Qawa and the Labasa (after which the town is named). 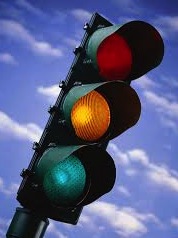 It is the largest town on Vanua Levu and generally considered an agricultural (mainly sugarcane) town off the regular tourist track. Random fact ‐ Labasa prides itself for having the first set of traffic lights erected along main street on the entire island of Vanua Levu!

The town offers most conveniences such as a selection of five supermarkets, hardware & parts stores, Internet café’s, DVD’s, clothes, butchers, a Post Office and pharmaceuticals. There is a large local market brimming with fresh fruit and vegetables. The bus station and taxi stand is next to the market.

Sailing a little farther west of Palmlea Farms along the north coastline, you can tuck in behind the northwestern side Nukubati Island and enjoy the anchorage.

Nukubati is a private all‐inclusive island resort that caters for a limited number of guests. Like Palmlea, Nukubati is eco‐sustainable, wind and sun power the buildings, rainwater is harvested and waste is recycled.

It is a short sail (15kms) to picturesque Kia Island, a large sand‐fringed rock island northwest of Palmlea. A visit to Kia to present your traditional sevusevu  is always a celebration, as an average of only 2 yachts per month visit this beautiful island during the season. 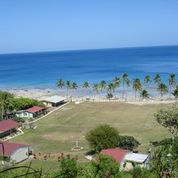 There are some 300 indigenous Fijians living on the island spread between the three villages of Ligau, Yaro and Daku. The island school is located in Ligau village and the attending school children are happy to welcome visiting yachts and are extremely appreciative of any school supplies you can spare.

Hikers can take an adventurous hike up the mountain to see the antique (Circa 19th Century) iron cannon that was set atop the mountain. There is no development on the island, the pace of life is beautifully relaxed and a subsistence lifestyle of fishing, farming, weaving and kava drinking is typical.