You are here: Home / Surfing / Surfing Fiji : All about the waves

If you love surfing, you will love Fiji! After a long period of restricted use, the Government has released access to all breaks to everyone.

We have many awesome waves to offer in addition to the world famous Cloudbreak, and if you are cruising around our magnificent waters; you should check them out! From beginner to advanced; here in Fiji, it’s all about the waves…

Natadola Inside Left is an inner reef left in Natadola Bay (just outside Nadi), that only breaks when there is a large SW groundswell around. It is great for beginners and the wave is only fifty yards from the beach. You need a large SW swell at high tide with offshore winds to create the perfect 1-4ft beach break.

Swimming Pools on the SE side of Namotu Island while tricky to catch going off, is one of the most fun waves in Fiji. A righthander that has a wide-open face and steep wall make the perfect playground. NW-W winds at mid-high tide works best for this beginner friendly spot. It can even tube when the SW swell gets bigger. 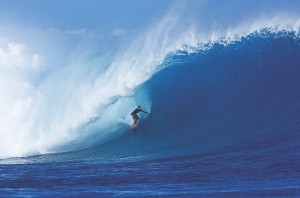 Mana Island has a left-hander on its North west tip that is great fun on its day and good for long boarding. Best on midtide and requires large swell to get through Mana passage with winds from S to SE offshore.

Monu Island has a left on its Northern side that can be fun at mid tide and breaks very shallow. Wind from the South is offshore.

Waya Island has a great left on its Northern side near Octopus Resort and barreling waves right in front of the resort that are also fun. Requires offshores from the East and South.

Tavewa near Blue Lagoon Beach Resort has a fun righthander. Best swells are from the North but it also works in large SW’s. Ideal for intermediate to advanced, and breaks perfectly on its day.

Cloudbreak is rated one of the top ten waves in the world! Cloudbreak is a ‘must surf’ wave on most surfers bucket list. Depending on swell direction and power, it can be a long wall with tubing sections, or a very long and critical barrel. Surfable up to 20ft while also fun at 2ft. A S-SW swell (the more West in the swell the more critical the wave) with a NE-SE wind make this great at any tide. Can be deceptively heavy, and over 6ft is for the experienced only!

Restaurants is also rated one of the top ten waves in the world. It doesn’t break a lot, only in a large SW ground swell, but when it does, it is perfection in motion.

Namotu Left is sometimes referred to as the best longboard wave in Fiji, but it can also pack a punch for the shortboard guys too. Great for all levels when 3ft and under, but when it reaches 8ft and above, it is one of the best big wave spots in Fiji for intermediate surfers and above. It is a quality long set-up and is a little protected from the SE trades. S-SW swell and E-NE winds (avoiding gnarly currents at low tide).

Tavarua Rights is a rarely surfed right-hander on the back of Tavarua Island. It needs a considerable SW swell and Northerly winds, which is a tough combination to find in Fiji. When the conditions align with a high tide however, it is a very quality set-up for intermediates and above.

Wilkes is a long right-hander on the opposite side of Wilkes Passage from Namotu Island. World class on its day, which is S-SW swell with NE-NW winds. At 1–3 ft Wilkes is very accommodating, over 3 ft, it is recommended for intermediate surfers and above.

Desperations is big hump in the barrier reef just North of Wilkes Passage. It is not a classic reef pass set-up, but has a unique shape that funnels the incoming swells into fun peaks. SW–SE swell and NE-NW wind make a good wave for intermediate surfers and above.

Mini Cloudbreak doesn’t quite live up to the quality of its namesake, but if there is a trade wind blowing and you want to surf somewhere fun, without a crowd, this is a good option. It is a long stretch of reef in the Navula Passage near Momi Bay, but it tends to section a bit. It’s definitely worth a look if the SW swell and NE-ESE wind conditions are right.

The Sigatoka Sand dunes stretch West for seven kilometers from the mouth of the Sigatoka River. There are waves along the entire stretch of beach, however they depend on the banks at the time. The bank at the river mouth is much more consistent and better protected from the SE trade winds. While generally a long barreling left-hander, there are often some short punchy rights available that break back in to the river channel. Avoid after heavy rain and if the water is murky as Bull sharks do tend to hang out around the river mouth. WSW to SE swells will pick up with a NW-NE wind.

The Coral Coast is the area between Natadola and Pacific Harbour where there is a long reef flat leading from the shore out to a break along the reef crest. Waves here are usually accessible from the beach and take their name from the resorts they are in front of.

Hideaway is a great little reef pass in front of the Hideaway Resort. A 10-minute paddle from the beach gets you set for some super fun right-hand tubes which are fairly accessible to all up to 3 ft. When the swell gets to 4ft and above, it churns out some pretty intimidating barrels and usually inflicts a few grazes to the unlucky. Best conditions are SW –SE swell with N-NW winds.

Naviti is similar to parts of the North Shore of Hawaii when it’s working i.e. fast, barreling peaks that end in close outs in the shallow water. Expect a 20+ min paddle out from the beach.

Beachouse is similar to Hideaway in that it is a short and punchy right-hand tube. SW-S swell and NE-NW winds at mid to high tide make this a great wave for intermediate level and above.

Frigates Pass is an exposed wave that picks up every ounce of energy from the southern ocean. A world-class wave to rival Cloudbreak, and one of the longest in Fiji. The wave breaks for over 100m when it is lining up properly with a W-SSW swell and NE – E wind. Intermediate and above when it is small to medium size. 6ft and over is experienced only.

The best time to surf in Kadavu is between December and May when the winds are light and generally out of the North. Remember before surfing around Kadavu, the traditional sevusevu should be performed. This is a show of respect and although the new ‘Surfing Decree’ opened waves to the public for surfing without having to present a sevusevu, it is extremely advisable, as this is a very traditional island.

King Kong Left is a heavy left-hander that comes straight from the deep to meet one of the most Southerly points of Fiji. Situated off the island of Kadavu, this will pick up any scrap of swell around from SE–SW. NE-E winds are best but it can also handle the SE trades if not too strong. Low tide can get pretty gnarly. Intermediate level when small, 4ft and over for advanced only.

Typhoon Alley is a high quality, barreling righthander. Mid to high-tide with offshore winds anything from NW to SW and swell from S to SE. Can get very rippy at times. Surfable from 2-10 ft.

Vesi Passage is a very powerful, shallow breaking left-hand barrel. Not for the faint hearted as this is an extremely heavy, >4ft wave (take a good supply of spare boards as breakage is common!). Swell is best out of the S to SE with NW wind at mid to high tide. On its day it is mechanical perfect barrel.

Nacomoto Passage is a very fast peeling, righthander in SW swells; perfect when the winds are out of the west. Only works at mid to high-tide, and best around 6ft.

SoSo Passage is a wedging takeoff and long wall that starts barreling when over 4ft, surfable from 2-12ft. Swell is best clean, and from the South with offshores anything from E to W. 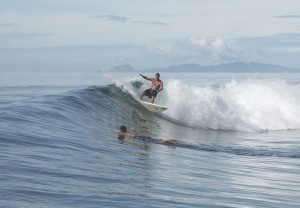 Suva Lighthouse is a rare but great right-hander that breaks in the entrance to the Suva Harbour. SW or SE swell with N-NW winds at mid to high-tide. Doesn’t handle too much size, but if you get it on, it’s a great wave for intermediate and above. A good section for learners and beginners is on the inside of the reef.

Kini’s Left provides a high performance left-hand tube ride. Bowly and can get heavy with a decent NW-N swell with SW-SE winds.

Kia’s Right on the opposite side of Twin Pass from Kini’s Left, is a long walling right-hander with a mellow takeoff and some good backdoor tube sections in a NW-N swell with SW-E wind. Rippable walls for advanced-beginner level and up.

There are many deserted waves throughout the Lau Group but as most are dangerous and hospitals are far away, it is unadvisable to surf this area without having a very high skill level in addition to a well equipped medical kit. If you get it on, it’s because you deserve to, as it is not an easy destination. Islands of recognition for surfing in Lau are Moala, Matuku, Totoya, Lakeba, and Vanua Balavu. There are other islands with waves in this area but you will need a decent boat, plenty of supplies and a lot of patience. The waves here are often offshore in the trade winds so all you need is a good S to SW swell.

Ian Thomson, owner of Island Surf Fiji, has combed the islands of Fiji for the best surf spots. He spent 12 years chartering yachts with Safari Charters, with top international surfers onboard looking to discover new breaks to master.

The Fiji Surfing Association (FSA) is the sole national governing body in all matters relating to surfing, and access to surfing beaches for the public of Fiji. It is the mission of the FSA to bring the sport of surfing to the people of Fiji by encouraging and enabling mass participation with emphasis on youth and children.