In Fiji’s early sailing history, sea battles involving hundreds of canoes were frequent, with control of the seaway as the major objective.

One of the most elaborate and beautiful artifacts of Oceania, is the mighty Drua. The Drua inspired both fear and awe, and was a true masterpiece. 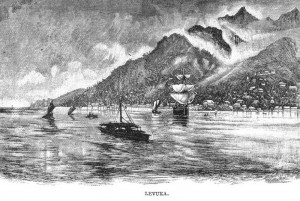 Expertly designed and hand crafted over a period of 6 to 7 years, the Drua was a double hulled canoe, gigantic in size and requiring total community involvement in its construction. Up to 118 feet in length, with a mast height of up to 70 feet, it could carry in excess of 150 warriors! Even at that size, a Drua could reach speeds of over twenty knots and still remain highly maneuverable.

“Up went the huge sail, down went the great steering oars, splashing into the sea, and away we shot like a racehorse. Owing to the great rate at which we were going, the sea was like a hissing cauldron on either side of our course, and the vessel, instead of having time to mount over the smaller waves, cut its way through them.”  West 1869

Abel Tasman was the first known European explorer to sight the Fiji Islands. In 1643 his ship came close to being wrecked on the reefs of the north-eastern part of the group. Scared of landing due to reports of cannibalism, he simply noted the islands existence and hurried along!

Captain James Cook was a bit braver and landed on Vatoa Island in the southern Lau group in 1768. By 1777, he had begun to promulgate the name Fiji after blending the way Fijians referred to their isles (Viti) and how the Tongans spoke of it (Fisi).

When Captain Cook retired from service, Captain William Bligh learned much from him in preparation for his voyages, such as the ways to keep a crew healthy at sea. What he did not seem to learn however, was how to command without tyranny, in which lies the origin of the infamous accounts of the ‘Mutiny on the Bounty’ 1789. Bligh and 18 of his men were subsequently chased by cannibals through the channel he charted – now known as the ‘Bligh Waters’, situated between our two largest islands, Vanua Levu and Viti Levu. 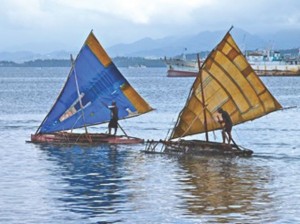 The changes that were to come from contact with the outside world included illness and social unrest as disease, alcohol, and firearms were thrust upon the Fijian people.

In 1800, a schooner from America ‘Argo’ ran aground on Bukatatanoa Reef near Lakeba, and while the crew reportedly showed no sign of disease, a sickness began to sweep the country, which some say was cholera. Other illnesses followed and decimated the population each time.

“Vessels can come to a native island with no apparent sickness on board, yet shortly afterward an epidemic of tuberculosis, pneumonia, dysentery, gonorrhea, measles, or syphilis may set in. The boat may stay a day or so and go on, entirely ignorant of the disaster which sweeps over the native non-immune population like fire through a dry forest”.

Another gruesome introduction, infamous in Fiji’s political history was by a sailor named Savage who was ship wrecked near Nairai Island around 1807. Fluent in Fijian dialects, he easily maneuvered himself with the Bau Island chieftain. Having salvaged a number of muskets, he trained the Bauan leaders and participated in the first wars in Fiji in which firearms were ever used.

Add to this, the results of the unaccustomed use of alcohol and the population began to experience the undesirable consequences of the outside world.

However, like other Pacific island countries, Fiji was forever changed again by Christian missionaries, and today our country is completely cannibal and firearm free.

Thankfully our immune systems have evolved over time with repeated exposure, and we no longer trade in alcohol…..although we do like our Fijian Made Bounty Rum, aptly named in homage to our sailing history.