You are here: Home / Features / The Tale of the Self Sailing Yacht: A Salvage Story

One dark night, on route to be delivered to Australia, disaster stuck when a beautiful 42ft Beneteau yacht hit the reef in Fiji’s Lomaiviti group of islands.

The panicked crew jumped ship onto a passing fishing boat and the next day reported the grounded yacht to the authorities. 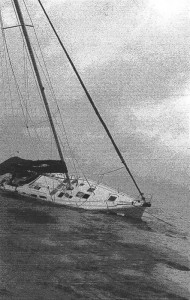 The Dive Centre Fiji Ltd was contacted, and plans to salvage the yacht began.

After calling numerous villages in the vacinity of where the yacht was left, no one claimed to have seen such a vessel!

A few puzzled salvage experts from the team at the Dive Centre Fiji, the crew and an insurance company rep sat staring at one another, hoping that the boat had not sunk…when the telephone began to ring.

A concerned citizen reported a strange crewless yacht that had run aground on the reef outside his village in the early hours of the morning. The villagers had been awoken by the noise from the loud engine at 3am; the helpful caller had boarded the yacht to switch it off – much to the delight of the rest of the village. But there was not a soul to be found onboard!

The caller gave a good description of the vessel, and everything became clear. The yacht that had been reported as grounded at one island, had floated at high tide and sailed off on her own adventure, stopping only when she hit reef at the next island about 10 miles away.

The salvage team set off for the village armed with their tools and equipment, prepared for any necessary repair work. When they arrived, and after they had presented their sevusevu to the village chief, they set about assessing the damaged vessel.

The keel had been almost ripped off completely, so the team removed it cleanly and temporarily patched the visible holes. At high tide, the boat was floated to the beach where it was then patched properly with fiberglass.

The Dive Centre’s work boat, ‘Salmar’, which is a 13m steel vessel with a 5 ton lifting capacity A-frame, came to collect the 3.5 tonne keel that was still sitting on the reef, and to tow the yacht back to Suva.

Since her adventure the yacht has completely recovered from her ordeal and been repaired to her beautiful pre-accident state. A short while ago, staff at the Dive Centre Fiji stood on the dock and waved her off as she set sail into the sunset once again…this time, with crew!

Tips from the Experts

Make sure you anchor far enough away from the reef so that if you drag or your rope/chain snaps, you have enough time to do something about it.

Use your GPS as a guide and have the view zoomed in on the charts when in reef areas as some sailors hit reefs when chart plotters aren’t zoomed in enough to show details.

If you run aground on the reef

Set out as many anchors as you have to prevent you going further into the shallows and sustaining more damage. Anchor with bow into the weather waves.