Last October I got a call from the Chief of Totoya Island (Roko Sau) letting me know that a whale had gotten stuck inside a lagoon near his island.

I’d never been to the Lau Islands before yet had always heard lovely things about the clear waters and teeming marine life of this remote island group. Roko Sau (who also works for the Pacific Blue Foundation) was enthusiastic and managed to charm us a ride on a Super yacht thanks also to the support of Yacht Help Fiji. 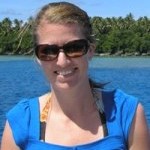 After a 15 hour ride I set my eyes on the stunning sight of beautiful and majestic Totoya. As we moved into the interior of the horse-shoe shaped island I scanned intently for any sign of the whale. Finally there was a blow but my heart sank as I realized that the whale was stuck inside a very small and shallow lagoon.

We jumped into a skiff with the Super yacht crew and moved through the narrow S-shaped channel into the lagoon.

I then saw the animal up close for the first time and confirmed it was a male, subadult humpback whale. He was in good condition … except of course for his current location within Vakamatuku lagoon. The lagoon had a maximum depth of around 16m and was just over 50m in diameter.

The channel he had to exit through was only 6m deep, 10m wide and about 10m long. I watched him as he unknowingly swam past the small entrance.

I felt anxious about his fate as it was the time of year when humpback whales should be beginning their southward migration to Antarctica in order to feed. Any energy he spent swimming around this lagoon would take away from the reserves needed for the 6-8 week swim south.