Setariki Ledua grew up on the isolated island of Fulaga, sailing traditional Camakau – Lauan canoes carved from the Vesi (Intsia bijunga) tree. His childhood was spent immersed in sailing, learning all he could under the powerful influence of both his father and uncle. Through them he learnt to sail, navigate and build the Camakau, and of his sailing ancestors exploring and trading throughout the region. Sailing was always a passion for Seta, until he volunteered as crew on a historic voyage along ancient migratory routes on the Uto Ni Yalo, when it became a way of life… 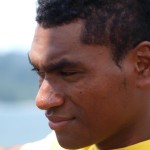 This is my story, as told by Setariki Ledua
As an oceanic people, Pacific Islanders have a history of navigating without instruments across vast distances to discover far-flung islands. We sailed by acute observation, educated intuition and intricate observation of the stars, sun, moon, wildlife and ocean swells. While technology has advanced and made sailing accessible and possible for the masses, it has also caused us to become removed from the natural skill of traditional navigation.

Pacific Islanders trace their origins to certain canoes, for each is a sacred and living treasure that connects people to their ancestry. It was through sailing that I felt the connection to my ancestors. I was the youngest student of navigation during the voyage and turning 21 at sea – bound for Cocos Island is a birthday I will never forget. As I put the theory into practice onboard the Uto ni Yalo, I felt as though my ancestors were right there with me, giving me the confidence I needed.

To begin, you must know where you are and where you are heading. Back in Lau, this was simple as the next island appears on the horizon before the last disappears from site. I soon learned this technique once we set sail for New Zealand. You need to align yourself to a path using the waves and currents. There are different currents in different places; when you are near an island the current is strong, yet it is not so strong in the open ocean. You learn to tell the difference between drifting off course due to wave direction or the wind. All islands have dominant waves and swells. Wind waves are affected by wind direction while the dominant ones are there regardless – it is important to know the difference.

The Motion of the Ocean

You must constantly pay attention to the motion of the boat under your feet, and calibrate your body to the vessels movement with the ocean. If you loose an indicator, such as on an overcast day or night, you need to keep the same motion going until you find another indicator from nature such as the stars, or the sun. You can use the waves and wind to maintain your course. Ocean swells are a crucial guide in sailing. Navigators recognize up to eight different swells, one from each octant of the compass. Dominant and most reliable are those from the south, southeast and east, associated with the tradewind season (summer in the Southern Hemisphere). During the winter, swells come from the southeast and south.

Currents reveal themselves by the shape of the waves. A current flowing against the wind produces steeper waves, one flowing with the wind flatter waves. The direction and strength of a current may also be revealed by the pattern of ripples on the surface of the water. Currents make a significant difference for how a navigator adjusts his course in actual voyaging.

Even in the middle of the craziest storms you still have to maintain your attention to the motion and the angles that the waves are smashing into the boat. As for the flat calm days where there isn’t a ripple in sight? Well, then you just jump in and have a swim! 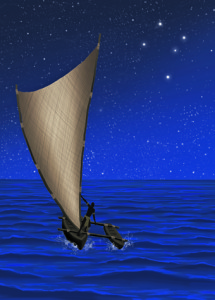 It’s all about understanding the natural environment and utilizing the elements that surround us every day. Our ancestors knew this and lived by a reciprocal relationship with nature. They would have waited for the right time to voyage. They would have prepared themselves thoroughly – smoking fish, collecting rainwater, food, spares etc. That perfect time would no doubt have coincided with the modern yachting seasons here in Fiji.

Before the invention of the magnetic compass, pacific island voyagers recognized the cardinal directions of north, south, east and west (although they had very different names back then) by understanding the ocean. Its every movement, its appearance, currents, swells, colors, winds and temperature variations. While they would have depended fundamentally upon the ocean, they would have also used the night sky for navigation, since stars and planets were their most dependable form of landmarks on the open ocean.

Celestial Navigation in one form or another, is one of the oldest practices in history. The skill of finding your way by the sun, moon, stars and planets is something our ancestors would have had to master. Navigators would have used their honed senses passed on through oral tradition, chants or more often, song. We too would have had chants, but unfortunately to my knowledge, most of these died with our ancestors long ago.

Specific constellations can be used to locate your position, and to estimate the speed at which you are travelling. Unlike the sun, the stars rise and set at exactly the same point on the horizon every day, year after year. Obviously as the earth rotates, stars travel across the sky, but as one star leaves the horizon, the next star rises, and following a star path can keep you on the same course throughout the night. An expansion of this method in a circle to represent the horizon would be what was referred to as a star compass, marked with the names of star paths that rose at various points on the horizon. This method would have been used by numerous cultures throughout the Pacific. 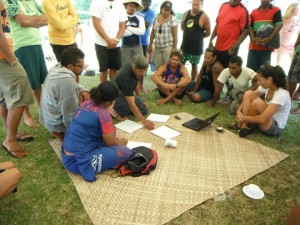 Learning the art of celestial navigation

Before modern calendars, or weather prediction modeling, our sailing and farming forefathers would observe their natural surroundings for patterns and behaviours that indicated optimum times for voyaging, planting, harvesting or preparing for cyclones. They would read the waves and clouds to determine currents, predict weather and identify some islands based upon how the clouds would cluster.

My friend Paula Liga also hails from the island of Fulaga, and remembers vividly being 14 years old and along with a group of 5 friends, jumping into Camakau and setting sail for Namuka Island. Paula’s brother was with him and upon noticing a black cloud with what resembled the roots of a mangrove tree told Paula to put down the sails. He knew that this meant a strong wind was headed their way, and sure enough, within 15 minutes the ocean surface had completely altered. Gone was the soft rippling of the current, and instead came huge crashing wind waves. 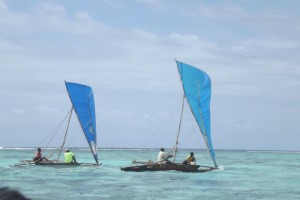 Both Seta and Paula grew up sailing traditional Camakau

There were many such examples, frogs calling loudly in the evening indicating heavy rains overnight; red clouds in the morning – sailors warning, usually signifying a windy rainy afternoon. Others were more specific and indicated the beginning or end of cyclone season. When the Belo (Heron) flies inland, or the bees start building their hives at low levels, you know a cyclone is coming. The arrival of the Dilio seabird back in Fiji would mark the end of cyclone season, that together with the flowers appearing on the Mako and Kaudamu trees.

Today we are lucky to have satellites watching out for us from above, but it’s nice to know that without them, it is still possible to be predict optimum sailing weather with some accuracy by simply following natures lead.