Humpback whales are seen migrating through our waters, as they travel to Tonga to breed and calve after feeding in Antarctica. There are large groups of pilot whales that inhabit our waters, and false killer whales that seem to come through annually singing loudly as they do!

Of course we also have the odd individual that you may encounter, minkes and sperm whales being the most common. 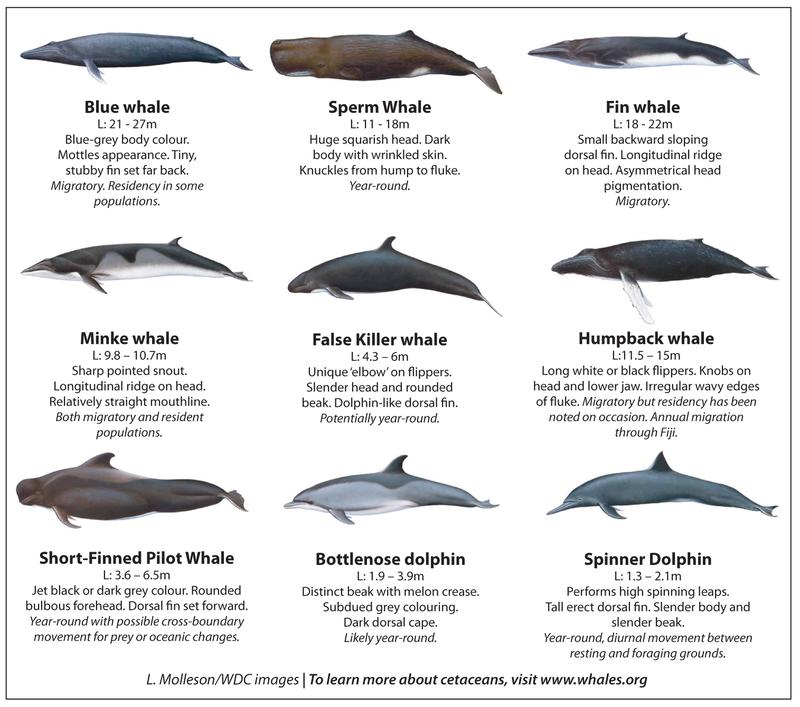 Cetaceans may be disturbed by the presence of people, vessels or aircraft. In order to ensure the conservation of these magnificent animals in our region, it is our responsibility to minimize the disturbance caused by our presence.

Towards that goal, the collaborative efforts of SPREP, Cetacea, IFAW, and FFEM have produced some regional best practice guidelines.

Whale and dolphin watching activities can potentially cause long-term disturbance to cetacean populations, which include:

Changes in the behavior of whales and dolphins need to be recognized and acknowledged as such, so that animals can be left undisturbed. The following behaviors may indicate that a whale or dolphin is affected by our presence:

Populations, and individual cetaceans may react differently depending on the species, their age, sex, and if accompanied by a calf. Do not encircle animals and always leave them an ‘escape’ route.

Therefore, the following recommendations need to be considered:

When vessels are within the caution zone of whales or dolphins:

The most appropriate method for approaching a whale or a dolphin is from the side and slightly to the rear of the animal. Avoid approaches from head on or directly from behind.

There are sightings of humpack whales being reported from all over Fiji! Some females set up camp in a nice shallow, sheltered bay to calf while many others are just pausing to say “Hello” en route to Tonga to do the same. Sightings have been recorded in locations such as Lau, Beqa, Namena, Savusavu, Koro and Macuata.

This is where YOU can help us determine a clearer picture of numbers, and migratory patterns of our whales!

If you encounter a humpback whale (or any other species of whale for that matter) you can record the information about the sighting on the form(pdf here), tear it out and post it off to the provided address from the next post office you visit.

Dr Miller and her colleagues at the Department of Fisheries will add your data into the national database and compile the findings that will help our government conserve and better protect whales and dolphins in Fiji.