You are here: Home / Features / Balolo Rising in Fiji

“A wonderful affair” – these were the words that Thomas Williams, the Methodist missionary at Lakeba, used to describe the catching of the balolo worm around Nadawa passage just off the chiefly village of Tubou, Lakeba on 19th November 1841. 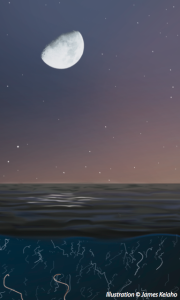 And a wonderful affair it truly is. There is wonder at the bounty of nature and its unfailing regularity, and there is joy and excitement in going out as a family or village community to reap the harvest of the reef. People sing and laugh and chatter, and wear their best clothes and freshly strung salusalu (garlands).

For the uninitiated, balolo is a kind of edible sea worm, scientifically known as Eunice viridis, which spends most of its time in the deep recesses of certain coral reefs. It rises in its millions to the surface for a few hours once or twice a year, at a certain phase of the moon, for the purpose of reproducing itself. Males are reddish-brown, females green. Strictly speaking, the balolo that rise are not the whole worm, but rather segments of it. The time when the Balolo rise may be termed the Fijian whitebait season. It is watched for with the greatest anxiety, and predicted with unerring certainty.

This little sea-worm is not only good to eat, it even has things to tell us about Pacific prehistory. The Fijian name for it, balolo, is related to the Tongan and Samoan palolo. Because of the regularity of its annual risings, the name often occurs in the names of months. In Fijian, balololailai (small balolo) is a month approximating to October-November, while balololevu (large balolo) approximates to November-December. This reflects the fact that in some parts of Fiji, though by no means all, there are two risings, and the earlier one is generally smaller than the later. When we move further east, to Tahiti, we find that the word balolo is also used in the names of two months: paroro-mua ‘early balolo’, which is around April-May, and paroro-muri ‘late balolo’, around May- June. But, curiously, balolo is not found in Tahiti.

Watch Balolo – Courtesy of Misale and Eelco, S/V My Lady:

The first person to note this discrepancy and comment on it was Horatio Hale, the brilliant young ethnographer and linguist on the United States Exploring Expedition of around 1840. He wrote as follows: “Palolo, in Samoan, is the name of a kind of sea-worm which makes its appearance in shoals in the reefs, at a certain period of the year, and is esteemed a great delicacy by the natives. The worm is not known at the Society Islands [the archipelago of which Tahiti is the main island], but the name is still retained, with no meaning whatever attached to it,- a striking evidence of the derivation of the Tahitians from Samoa.” 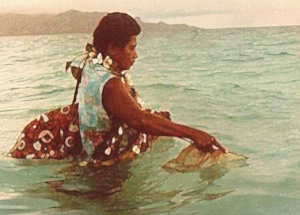 Predicting the balolo rise, at least within a day or two, is fairly easy. It nearly always occurs on the eighth day after the full moon, though in more easterly places like Lau and the eastern islands off Vanua Levu it’s often the ninth. Apart from the moon, there are said to be a number of other portents of the balolo. A green-red scum is often seen on the surface of the sea a few days before a rising, with a peculiar smell, though whether this is part of the balolo or another creature is unclear. In most places, the day before the rise of balolo there is a rise of shorter balolo-like segments, which are inedible. Thunderstorms are also said to precede a rising.

The moon is not only responsible for the movement of balolo worms from the coral reef. Pacific fishers learned long ago that the moon affects many other forms of sea life, determining the spawning of certain fish and crustaceans, especially land-crabs and hermit-crabs. The light of the moon is also considered harmful, not only in Fiji but in many Pacific cultures, and fish caught at night when the moon is shining are carefully stowed away or covered so as not to be affected. On the plus side, bananas and vudi (plantains) planted at the time of the full moon are said to bear large fruit. For these and other reasons, Fijians traditionally paid close attention to the moon and its phases, but with the passing of time much of the knowledge and terminology has been lost.

In some places, a particular tribe have the responsibility of looking out for the balolo and announcing its arrival with a shout to the waiting villagers. This happens in the early hours of the morning, typically about 4 or 5 o’clock. In some places it drifts ashore, but mostly they have to get into a canoe or boat and head out to the reef, and then scoop like mad with a coconut-leaf basket, mosquito netting, or whatever, as the balolo rise twisting and turning in a dense funnel-shaped mass from the depths of the reef, and spread across the surface of the sea. By sunrise, they are gone. 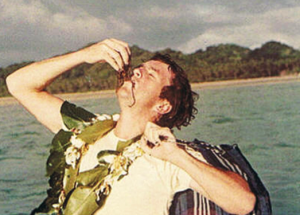 As soon as the villagers have gathered all they can, they make fires and ovens. Small quantities of Balolo are tied up in bread-fruit leaves, and have to lie in the oven from twelve to eighteen hours. Some like balolo raw, but it’s more usual to rinse it in freshwater and then boil or bake it. Like all food baked in the oven, balolo keeps for quite a long time, indefinitely if refrigerated. Some people save their finest yams specially to be served with the balolo.

When the balolo has been cooked, and the fires of the lovo doused by the mid-morning shower known as the suitalatala or isuinivuru, it is ready for distribution. In some places it is customary to take the first bundle of the deep green caviar to the chief of the village or vanua. If it’s been a big rising and there’s plenty to spare, it will be taken to friends and relations in deprived areas where the balolo does not rise or occasionally sold in the markets in the towns. The people of Tawake, in northeastern Vanua Levu, carry their balolo over the hills to the coast of Macuata province, and come back loaded with mats. Similar traditional exchanges occur all over Fiji.

The morning after the rising of the balolo is also recognised everywhere as an excellent time to go spear-fishing, because the larger fish have all thoroughly gorged themselves on balolo and are drifting helplessly around in a postprandial stupor. This fine sport is also known throughout Fiji by the same term, vakalua balolo, meaning ‘causing (the fish) to vomit their balolo’, which I suppose you or I would also do if we had a stomach-full of the stuff and someone hurled a multi-pronged spear through our mid-section. 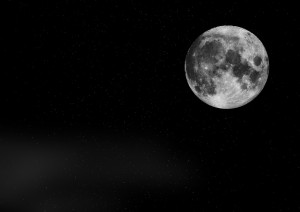 You may be interested in the following words of advice as to what to do with it. They are from the book “With hook, line and snorkel in the South Pacific”, written in 1969 by that grand old man of the Fiji seas, Rob Wright. “If fortunate enough to obtain a sample, try it as fritters. Make an ordinary fritter batter and mix in the balolo. Fry in the usual manner.“

“In the old days, the eating of balolo was limited to the two occasions on which it rose from the deeps. Today, with modern deep-freeze units, this tasty and rare food can be served throughout the year. When cooked, the glistening green colour of the eggs predominates. The food is rich in Vitamin A, riboflavin, phosphorous and iron, and the flavour has that delicate tang of the finest sea foods with some resemblance to caviar.”

One of the most detailed early accounts of balolo in Fiji was by men of HMS Herald anchored at Levuka in November 1854. The following was distilled from their writings by historian Andrew David in his book ‘The Voyage of HMS Herald’. “On 12 November a thunderstorm which broke to the south of Levuka, but did not reach the town, induced the natives to say that the balolo would appear the following morning. Accordingly, before first light the next day, about 100 people put to sea and caught large quantities of this marine annelid, some of which they brought on board the Herald.” 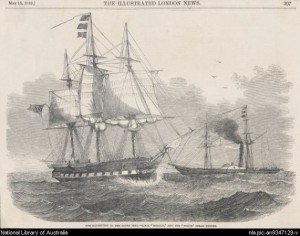 The balolo consists of a mass of green threads, which are the reproductive part of the annelid’s bodies. The balolo normally live in the reef, but when the time for breeding arrives, they leave the coral at dawn and rise to the surface. With the growing light their numbers increase rapidly until the surface seems a dense wriggling mass of them.

According to MacGillivray [the naturalist on the expedition], the Fijians were able to forecast this phenomenon by the thunderstorms [gedegede ni balolo], which they thought caused the balolo to be shaken out of the coral. By this means they were able to be on the scene, on the outer side of the reef fringing the coast, about two hours before daybreak.

“The Fijians then paddled around in their canoes, waiting for the first signs of the rising. The balolo were soon seen coming up from the coral in strings varying in diameter from the thickness of a quill to that of an arm. Each string or column spread out on reaching the surface when the animals composing it became diffused among the water, swimming with a rapid serpentine motion. They were then scooped up in baskets of open texture, like nets.”

MacGillivray noted that they could be cooked in various ways – in leaves in the native oven, by boiling or by making into soup. Cooked Fijian fashion, balolo has a taste not unlike that of European whitebait [the young of a kind of freshwater fish, cigani in Fijian]. The rising occurs twice a year, in October and again in November [not, of course, true for all of Fiji], and one of the Fijian months is named after it. It is very local in Fiji, only small numbers being found near Ovalau [this is still true], but near the neighbouring island of Wakaya it is very abundant. 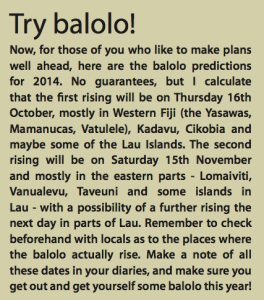 Along the coast to the east of Savusavu on Vanua Levu, the day of the rising of the balolo is also the first day of the descending of the lairo (land- crabs, Cardisoma sp), especially the lairodamu. By descending, I mean leaving their burrows in the hills and lowlands and crawling down in armies of millions straight to the sea, making detours for no- one and nothing, in order to dereneke (release their young into the sea).

These swarms of land-crabs often destroy plantations of dalo and yams in their path, and even crawl over people sleeping on mats in their houses. This is also, of course, a great time to go and cina lairo – step out at night with a gang of friends, one holding a Coleman lamp or some such, while the others simply sweep the lairo into sacks, and all return for a feast.