You are here: Home / Features / Go Nuts with a Coconut or Two

Spanish explorers apparently called them coco, which means “monkey face”. When you look at a freshly husked coconut, you will see why; the three indentations (eyes) and the hairy shell resemble the head and face of a monkey. 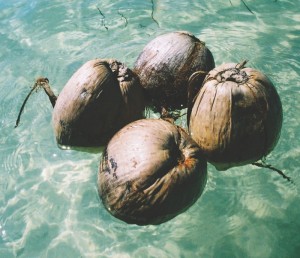 The trusty coconut provides a nutritious source of meat, juice, milk, and oil that has fed and nourished populations such as ours for generations. Coconuts have a long a respected history here in Fiji, as with many other South Pacific Islands.

Its origins can be traced to the activities of early European settlers in the 1870s, and the modern day copra industry still centers around Savusavu in southern Vanua Levu.

Today, about 20 per cent of all produced copra comes from the large plantation estates owned by the descendents of those early settlers, while small indigenous farmers produce the remaining 80 per cent.

Dried coconut is known as copra. Copra is dried in furnaces, or more typically, laid out in the sun for several weeks. 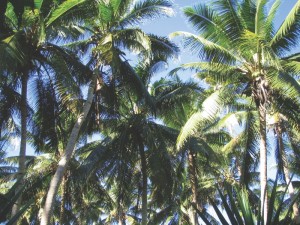 You will likely see examples of both in a typical rural village setting.

The dried coconut is then separated from the shell and the oil is extracted and refined.

Commercialization of coconuts began with Fijians (and the Tongans) and was later adopted by Europeans. With the establishment of coconut-based economies, exports included both oil and unprocessed coconuts.

The success of the copra industry at that time was attributed to lucrative prices offered for copra and the relatively low labour input. 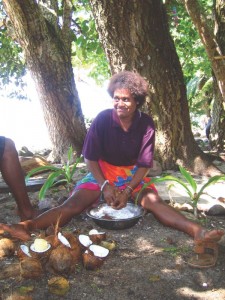 Wherever the coconut palm grows the people have learned of its importance as an effective medicine. For thousands of years coconut products have held a respected and valuable place in local folk medicine.

From the day we are born here in Fiji, we are massaged in pure virgin coconut oil to protect our delicate skin, we use it for cuts, burns and bruises, massage it into swollen joints and aching muscles. 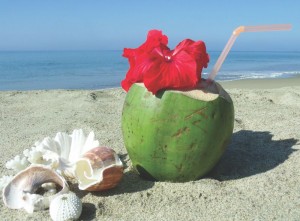 The juice of a young green coconut is used to treat constipation, and to help recover after a bout of dysentery

Before medically trained doctors were available, traditional healers took  people’s medical needs, and coconuts and coconut  oil formed the basis for the remedies they used.

Many of these remedies are still used today and often out-perform some of the more modern  that we now have access to .

Published studies in medical journals show that coconut, in one form or another, may provide a wide range of health benefits. Coconut milk is also beneficial for immune system health because it contains lauric and caprylic acid both of which are anti-bacterial and anti-viral.

Coconut milk is also a beauty booster and can contribute to healthy skin and hair. 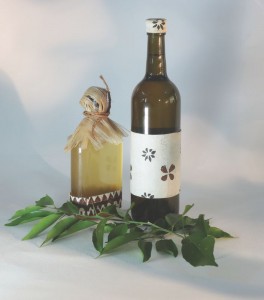 Coconut oil possesses healing properties far beyond that of other dietary oil although was once  mistakenly believed to be unhealthy  because of its high saturated fat content.

It is now known that the fat in coconut oil is unique and different  from most other fats and actually possesses many health-giving  properties… the ‘good’ fats.

What makes coconut oil different from most other dietary oils, are the basic building blocks (or fatty acids) making up the oil. Coconut oil is composed predominately of a special group of fat molecules known as medium chain fatty acids (MCFA). The  majority of fats in the human diet are composed almost entirely of long chain fatty acids (LCFA).

The length is extremely important, as our bodies metabolize fatty acids differently depending on their size. The medium chain MCFAs from coconut oil have a completely different effect on us than do the LCFAs commonly found in our food, and because MCFAs are smaller, they digest much more easily. In fact, unlike LCFAs, pancreatic digestive enzymes and bile are not even necessary for their digestion, and because of this, coconut oil can provide a quick and easy source of nutrition, without taxing the enzyme systems of the body.

In a similar way to Virgin Olive Oil, Virgin Coconut Oil is becoming recognized both locally and internationally for its wonderfully natural health benefits. It is the most natural form of coconut oil, extracted from the coconut flesh with the minimal amount of processing. This means there is no high heat, pressure, harsh chemical solvents or bleaching agents used. It is completely unrefined; which ensures that the oil retains all the natural goodness of the coconut itself. 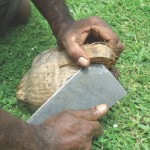 How to… …husk a coconut

Start by making cuts close to the head (not the pointy end, but where it was once attached to the tree) and down toward the pointy end. Gently twist the knife/axe/cane knife etc to open the cut. 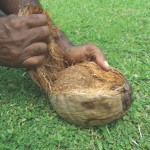 Repeat this several times around the coconut, and when all the cuts have been made, go around again and twist them some more.

Now you should be able to hold the segments and rip the apart revealing the coconut inside. 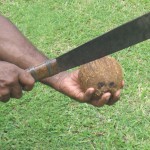 A trick of the islands is to hold the coconut with the three ‘eyes’ looking at you. Turn the coconut so that it looks like an upside-down face with the nose in the middle, above the two eyes. You should have a hard ridge at the top. Using the bunt edge of a meat cleaver or large knife, give a heavy blow to that ridge and then turn the coconut around in your hands, following the crack line around the nut. This should give you an evenly halved coconut. If you want to save the liquid – do the cracking over a bowl! 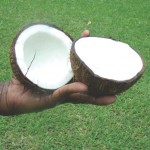 Coconut Water (Bu Juice) Coconut water is the clear, electrolyte -filled juice that comes from the inside of young green coconuts. Bottles of this are regularly snapped by the paparazzi in the hand of one celebratory or another.

One of the reasons coconut water has recently garnered so much attention (and not just from the celebs!) is because of its numerous health perks, ranging from electrolytes (5 to be exact: sodium, magnesium, calcium, potassium, and phosphorus), vitamin C, it’s low acidity, and ability to help you rapidly rehydrate.

Interestingly, Bu Juice is so pure and compatible with our bodies, that field doctors working in the Pacific during World War II would apparently use Bu Juice intravenously, to keep injured soldiers alive until blood supplies could be replenished!

Coconut milk is derived from mature coconuts. The white, rich liquid is harnessed by grating the coconut meat (the milky white part that lines the inside of the coconut) and squeezing / wringing it out into a bowl then straining into a jug.

Coconut milk is often used in tropical smoothies and cocktails (see below) as well as in Indian and Thai dishes to give them a thick and creamy taste. 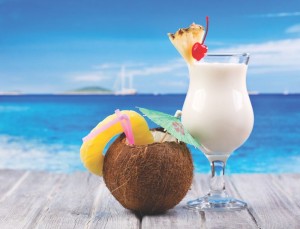 …mix it in a Piña Colada

The Piña Colada blends the flavors of coconut and pineapple – two fruits we have here in abundance!

Put all the ingredients in a blender and blend until smooth. Pour the cocktail into a tall frosted glass. Garnish with pineapple wedge.